This award is presented annually to an individual who has made an exceptional contribution to humankind, by carrying forward the ideals of Up with People. This year’s honorees are Sarah Kirk Calderwood and Mia Hansen.

Sarah Kirk Calderwood (‘95E) recalls her year of Up with People travel “was one of the best years of my life when I made friendships all around the world that will last a lifetime.” 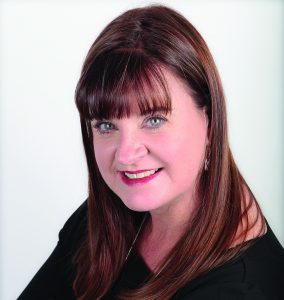 One of the worst years of Calderwood’s life was 2009, when her three-year-old daughter Helena Kirk was diagnosed with cancer. Helena is a cancer survivor, but it took 841 days of chemotherapy, over 650 procedures and years of recovery to get her healthy and well again. Calderwood met many of the other childhood cancer families and her daughter became friends with the young patients she spent years battling side by side with at SickKids hospital in Toronto, Canada.  Calderwood has devoted her time, energy, and abilities to create an advocacy program on behalf of these children.  Daughter Helena, now 16, was the voice and the face of this work.  Calderwood was the behind-the-scenes organizer who made it all work.

For her work in support of Helena’s advocacy Calderwood, was named a recipient of the Reunion 2022 J. Blanton Belk Outstanding Alumnus/Alumna Award.  “Volunteers can accomplish big things, whether measured in dollars or by impact on those in need”., said Calderwood.  As a volunteer, she was instrumental in working on a multi-year project to obtain $30 million in funding for childhood cancer treatments in Canada and advocating for life-saving health systems changes. She also was able to unite many smaller regional organizations under a new umbrella organization to obtain their goals. She brought the issue of underfunding and slow treatment approval to national awareness. Finally, her efforts changed the way considerations of funding and treatments are decided as families and survivors are now part of the input and approval process.

A core value of Up with People, one shared by Calderwood, is to be caring and compassionate for those around you that are struggling and doing what you can to help.  Helena lost many friends to cancer because their families lived in the wrong area or were not able to gather thousands of dollars in a matter of days to travel to the trial or treatment that had a possibility to save their young lives . . . surmountable barriers that needed only focus, effort, and organization to be overcome.

This inspired mother and daughter to co-found the national organization Helena’s Hope in 2017. Together they spent the next 5 years sharing the stories of these young cancer children and the crushing loss of their unnecessary deaths with leaders in Canada. What resulted was more changes for children with cancer in a few years than had been seen in four decades in Canada. Beyond the $30 million dollars of funding from the Canadian government, an Office of Pediatrics was opened at Health Canada, streamlining approval processes that resulted in a drug for a child and adult being approved on the same day for the first time in Canadian history.

McKell Neilson (’95E), speaking of Calderwood, noted that she “has actively demonstrated the ability to bring multiple stakeholders together under.  Most recently, she was able to build consensus and get endorsements for an advocacy campaign and funding plan from over 40 children’s and cancer organizations, 30 leading pediatric oncologists, 150 members, and over 80 Members of Parliament.  This was an unprecedented level of commitment, support, and collaboration at the national level.  Central to this work was ensuring patient, survivor and caregivers’ voices were central to all the strategic plans, research, and engagement opportunities on behalf of those children that suffer from and battle cancer on a daily basis.

Calderwood led an Executive Team composed of high-level professionals with diverse skills, talents, and experience.  With this team-oriented approach, she was instrumental in successfully advocated for the $30 million in federal government funding.  Additionally, she also secured over $750,000 in pro bono work through building alliances and a network of trusted professionals and volunteers to further the cause.

Calderwood, her husband John, and daughters Helena and Hope also do hundreds of hours of volunteer work and are spokespeople for several charities in Canada.

Mia Hansen (‘77D) has touched the lives of so many.  Perhaps it began when she was the Dance Captain during her tour in 1981.  But it is suspected that her inherent love of sharing herself with 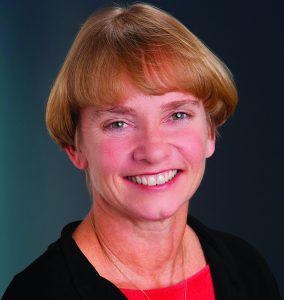 others was inborn and simply brought to its fullness during her years with Up with People.  This recipient of the Reunion 2022 J. Blanton Belk Outstanding Alumnus/Alumna Award has been described by Mirea Felicita Sharifi (‘93E) as ““Simply . . . a force of nature. She has made exceptional contributions to humankind, carrying forward the ideals of Up with People. She has inspired and led by example.”

After years on the road as a UWP Show Manager and show choreographer, Mia, a Tucson resident, became a volunteer with the International Rescue Committee (IRC), helping settle refugees in Tucson over many years.  Most began as non-English speakers. Mia would sit for hours with them in front of computers, helping fill out applications in English for jobs, apartments, naturalization, and so on. She also served on the planning committee for RefugeeFEST, its mission to educate residents about the refugee population and to acknowledge the trials they’d endured.  The lives of the people she has supported over the years have been changed for the better and in turn, society is benefiting from their contribution as community members.

In 2017, Hansen founded Southern Arizona Adaptive Sports (SAAS), a nonprofit 501 (c) (3), volunteer-driven organization aimed to transform lives through adaptive sports. The mission of SAAS is to support the community through promotion and provision of fitness, recreation, and competitive sports opportunities for people with disabilities. Through strategic community partnerships and outreach, SAAS participants are participating in adaptive cycling, wheelchair basketball, wheelchair tennis and adaptive golf at national competitions. The organization has received numerous grants including continuous funding from The United States Tennis Association to promote wheelchair tennis. In 2021, the Arizona Storm, a wheelchair basketball team sponsored by the SAAS, won the Women’s Wheelchair Basketball National Championship.

When the global pandemic hit, Hansen created SAAS Cares and Project Renew, a way to stay connected and to give back to the community.  She developed a network of partners to help redistribute used medical equipment to those in need.  Under Hansen’s leadership, SAAS volunteers and participants invested time into restoring and distributing hundreds of used wheelchairs, food, and water to those in need in Southern Arizona and Mexico. SAAS Cares received a $10,000 grant from the Craig H. Nielsen Foundation for its initiative.

Hansen’s belief, indeed, her mission, is that, with access to the right resources, people can become empowered by their own abilities and gain the confidence to fulfill their potential.  SAAS’s outreach program focuses on sharing the programs and successes of its participants. This outreach builds bridges of understanding regarding needs and potential for empowerment. “Building bridges of understanding” . . . a mission of Up with People that Hansen has carried forward and expanded upon in her continuing contributions to society, within her community and, by extension, to the world beyond.

Visit the SAAS website http://www.soazadaptivesports.org/ to learn more about its work.